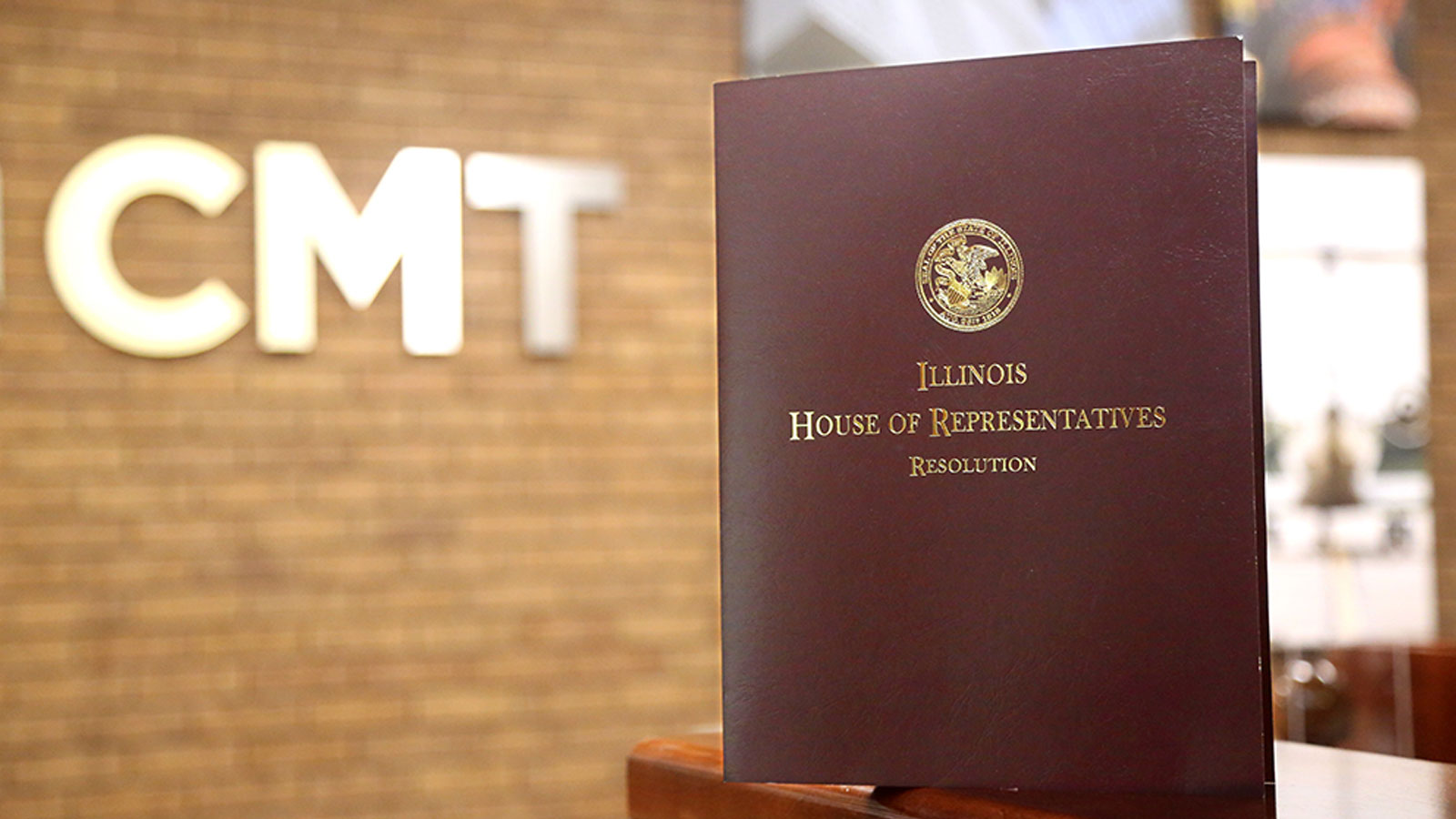 At our Annual Employee Recognition Celebration on September 29, 2021, CMT had a couple of surprise visitors. Illinois Representatives Mike Murphy and Tim Butler presented us with an official Illinois House of Representatives Resolution to recognize CMT for our 75 years of service. Read the full Resolution below!

WHEREAS, The members of the Illinois House of Representatives wish to congratulate Crawford, Murphy & Tilly, Inc. (CMT) of Springfield on its 75th anniversary and its strong legacy of stability and longevity as a company; and

WHEREAS, CMT began in Springfield in 1946 as three partners and a dream; starting in a small, second-floor office with no air conditioning, friends and civil engineers Len Crawford, Pat Murphy, and Ray Tilly began CMT in the aftermath of World War II; the friends had the idea that engineering could significantly improve our country’s post-war infrastructure; and

WHEREAS, Though CMT has expanded throughout the Midwest and Southeast, it is still headquartered in Springfield with its original name; and

WHEREAS, A lot has changed since 1946 and CMT’s humble beginnings; now, it has more than 20 locations across the country; however, the one thing that has remained constant is the company’s dedication to its employees and local communities; and

WHEREAS, For 75 years, CMT has strived to provide superior infrastructure solutions and to be responsive to the needs and expectations of its clients, all while fostering growth and development for its employees; currently, the engineering consulting firm focuses its planning, engineering, design, and construction expertise in the areas of aviation, rail, environmental and wetlands services, surface transportation, municipal and civil architecture and construction, and leveraging technology for the benefit of its clients; and

WHEREAS, CMT has received recognition for its work over the years, including being named the 2020 Large Firm of the Year by the American Council of Engineering Companies-Illinois Chapter (ACEC-IL), the 2014 Design Firm of the Year by ENR Midwest, the Illinois Society of Professional Engineer (ISPE)’s Best Large Firm to Work For in 2018, and many more; and

WHEREAS, CMT has proudly advocated for the communities in which it works, with efforts extending from the local, such as donating and volunteering time to charitable organizations like the United Way, to the global, including supporting college students in Engineers without Borders and promoting STEM initiatives for students of all ages; beyond delivering value to clients, it has shown a commitment to bringing value to its local and international communities; therefore, be it

RESOLVED, BY THE HOUSE OF REPRESENTATIVES OF THE ONE HUNDRED SECOND GENERAL ASSEMBLY OF THE STATE OF ILLINOIS, that we congratulate Crawford, Murphy & Tilly, Inc. on its 75th anniversary and wish the company 75 more years of success; and be it further

RESOLVED, That a suitable copy of this resolution be presented to CMT, Inc. as an expression of our esteem and respect.